If you’re looking for stores with the best steaks, Sam’s Club and Costco have high quality meat in stock for you. But between Sam’s vs Costco meat, which one is better?

Costco has fresher meat, but Sam’s meat is cheaper. Overall, the choice to buy depends on personal preference. If you want to cut costs, then you should shop at Sam’s. If you want your meals to taste great, then buy Costco’s meat.

However, this is not to say that Sam’s meat isn’t good for consumption. On the contrary, Sam’s has good meat quality. But let’s find out why Costco is the better option in this Sam’s vs Costco meat face-off.

Sams vs Costco meat: Which is better?

Both Sam’s and Costco sell meat graded by the US Department of Agriculture (USDA). The department has been grading meat in terms of tenderness, juiciness and flavor since 1927. So its grades are trust symbols for most meat stocks.

In terms of quality, Costco’s meat wins. The meat stocked there is always looking fresh, compared to Sam’s. However, Sam’s generally offers cheaper meat, which is sure to attract more customers.

Prime meat is the highest quality meat grade. It’s rich in intramuscular fat, typically known as “marbling”. It appears as white flecks or spots of fat on the surface, and insides, of red meat.

Meanwhile, Choice is the second highest meat grade. It has less marbling than Prime meat does.

Marbling contributes to meat juiciness, tenderness, texture, and flavor. So if you want your meat to taste rich and delicious, then Prime meat is what you should target. But if you’re not a big fan of fat, then buy Choice meat instead. 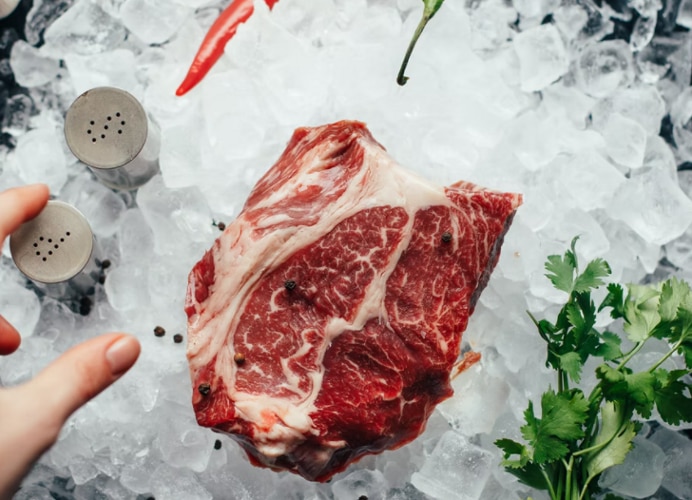 Where do both stores get their meat from?

Costco sources its meat from various suppliers and farms across the United States of America (USA) and Australia. The store has its own chicken farm in Nebraska, but its pork comes from JBS Foods. JBS Foods is the second largest pig slaughterer in the USA.

Veal is sourced from Atlantic Veal & Lamb Inc., which is the producer of the world famous Plume De Veau Veal brand. Finally, beef is sourced from the San Joaquin Valley in California, one of the best agricultural regions in the USA.

Unfortunately, the San Joaquin Valley is now heavily polluted. So you may want to rethink buying any beef that comes from that direction.

Contrary to popular belief, Sam’s doesn’t get its meat from China. Rather, it’s the first American-owned retailer to set up a physical outlet in China.

Sam’s Club meat is produced in the USA. The store sources its meat from companies like Nebraska Beef, National Beef, Swift, and John Morrell.

Since the store is owned by Walmart, there are strict policies and guidelines surrounding how meat is sourced. Walmart Policies and Guidelines clearly state that:

Walmart and Sam’s Club will continue to only accept fresh pork from animals raised under the standards of the National Pork Board’s (NPB’s) Pork Quality Assurance (PQA) Plus Program.

The choice of which store to buy meat from narrows down to two factors. Price and quality. We’ve affirmed that both stores carry Prime and Choice grade meats, but Costco meat looks fresher. So if you want meat that not only tastes good, but also looks like it, then you should buy Costco meat.

However, it’s pricey. So if you plan to throw a Christmas feast on a budget, you should consider the cheaper option; Sam’s Club.

We recommend reading the following articles. You’ll find other comparisons to help you know which stores to go to and avoid in the future: