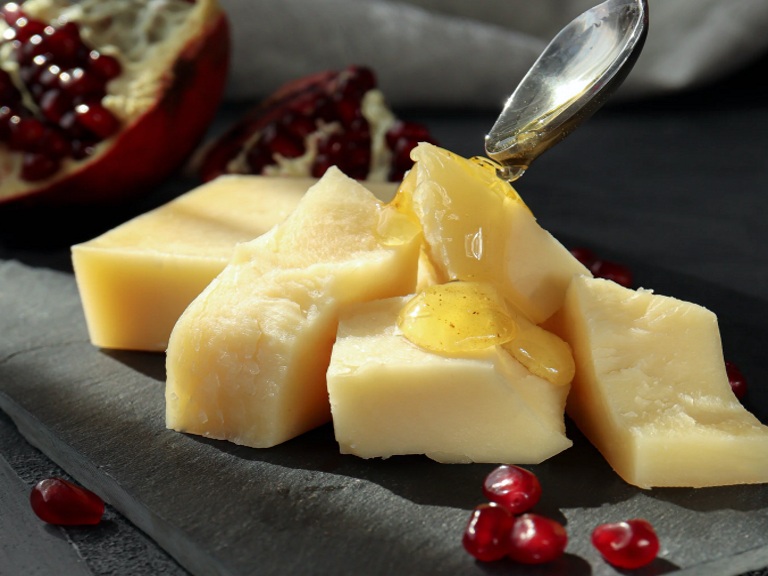 Velveeta is a popular brand name for a type of processed cheese with a soft and lump-free texture.

Originally, it was made from real cheese, but now it’s produced with whey, milk protein concentrate, and preservatives.

The most delicious way to use Velveeta cheese is to spread it on sandwiches, or incorporate it in soup dishes.

Because Velveeta cheese isn’t actual cheese, lots of people are skeptical about using it for cooking.

If you’re one of them, this article explores the best healthy Velveeta substitute for you to buy from the grocery store.

The 5 best Velveeta substitutes to spruce up your food taste

You can use any type of cheese to replace Velveeta at home, and it’d still turn out as smooth as processed cheese.

The bad news is that it’s quite tricky. Some cheeses will melt better than others, and you won’t always get the consistency you want.

But if you’re willing to overlook that for a healthier meal, then try these best Velveeta substitute:

Swiss cheese is a collective name for a variety of cheeses originating from Switzerland.

Usually, the cheeses are medium-hard in texture and some of them have holes. E.g. Emmental cheese.

The good news is that they’re made from real cow milk, so you can be rest assured that there are no suspicious ingredients sneaking into your food.

Cheese Whiz is another great Velveeta substitute for Velveeta since it’s equally processed and already in spread form.

So you don’t need to do the extra work of melting it. While it may not be 100% natural, the source milk used to make the cheese is obtained from cows.

It’s mixed with cheese culture and other ingredients like whey, canola oil, and mustard flour.

Sharp cheddar cheeses are the best healthy Velveeta substitute if you want an interesting kick in food taste.

As they age, the cheeses gradually switch from a mild and creamy taste to a tangier taste. Sharp cheddar cheeses last for as long as 2 years, so there’s very little chance of spoilage.

Feta cheese is the lovechild of sheep and goat milk mixed together. It is super soft and often soaked in brine to achieve a tangy taste like the sharp cheddar cheese and keep it fresh.

Feta cheese is rich in calcium and proteins necessary for keeping the bones strong. It’s the best healthy Velveeta substitute for you if you’re diet-conscious.

Feta is also a good substitute for other cheeses like Cotija cheese.

The Monterey Jack cheese has a mildly sweet flavor and semi-hard texture. It’s naturally made from cow’s milk and it can last up to 6 months.

The cheese comes in other variations like the Pepper Jack and Dry Jack. Pepper Jack is often made with chili peppers and herbs, and the Dry Jack is a perfect substitute for nutritional yeast and other cheeses like parmesan.

Is Velveeta healthier than cheese?

Though the product poses as a cheese substitute, it contains very little to no cheese and more of ingredients like sodium phosphate, calcium phosphate, lactic acid, sodium citrate, sodium alginate, and so on.

The cheese also contains high quantities of fat and calories, making it unsuitable for anyone who’s trying to maintain a healthy diet.

It can have severe effects on the body, such as slowing down the rate of blood sugar in your body.

However, if you must use Velveeta cheese, ensure to use it in strictly veggie-rich dishes like salads, soups, or omelets.

But overall, you’re better off just buying real cheese from the grocery store.

Enjoyed our cheesy piece on Velveeta? Then you’ll love these other related articles: